Named after Captain Daniel Ross, the Ross Island is now renamed as the "Netaji Shubash Chandra Bose Dweep" by prime minister Narendra Modi in 2018. It is a very small destination that comes under the south Andaman district, Port Blair and is barely 5 Kms from the Water Sports Complex, making it one of easiest inter-island to visit during your trip to Andamans.

Although most of the attractions in Andaman are famous for beaches and , Ross Island brings a bit of history to the table that makes your vacation complete.

This Island was first occupied in 1782 and a sanatorium was build there, and then again in 1857 by the British who used it as a Administrative Headquarters for 85 years. During this time, a lot of important government offices were made by the British on this penal settlement, which were later abandoned after an earthquake in 1941.

‍
The ruins of these old buildings made by Indian prisoners are still present at Ross, textured by thick roots of peepal and serie trees that takes us back to an era, long gone yet still remembered.

Magnificent man-caves, the old church and grim history associated with this place gives out a unique vibe that can’t be found anywhere else in Andaman and Nicobar.

The whole experience is even more mesmerizing with it's protected forest which is a sanctuary of a variety of birds and animals including peacocks and deer, that present an amazing experience for people who love to walk around and enjoy their time in the lap of nature under the shade of tall tropical trees.

The most unique thing about the island is that civilians settlements of any kind is prohibited by the administration which means there is no place to stay at night here and therefore everyone must leave the island before dawn.

Places to visit and things to do:

One of the best things about visiting the Ross Island is the history associated with it. The island has an avid collection of some of the oldest British and Japanese structures in India, that shows the luxurious life of Britishers after they occupied Andaman.

All operations in the isles, including the construction of Cellular Jail was overseen from this island, which also served as the residence of the old Chief Commissioner.

Indulging in these remnants of our unforgettable past takes us back to the penal settlement age and reminds us of our struggle for freedom.

2. The light and sound show:

The light and sound show at Ross takes us back to the past and showcases the history of how everything was planned and constructed in the islands.

The complete show primarily focuses on the penal settlement period which shows how Britishers came to Andaman and what they mainly focused on building and setting the administration to rule the isles.

The show also focuses on the luxurious lifestyle of the Chief Commander and his family and the hardships faced by the inmate Indian workers who build the jail, only to be thrown in its cell later on.

If you'd like to add a pinch of history to your trip, we recommend attending the show.

The sanctuary is located at the middle of the island and is filled with deer and peacocks, protected under the Andaman administration.

These animals are taken care of on a daily basis by a caretaker appointed by the government and therefore the population of deer and peacocks in the islands is the highest at Ross.

All animals live inside a reserved area filled with large tropical trees including coconuts and palms and are allowed to come out of the reserve to play around with people.

Feeding or harming animals in any way is strictly prohibited here.

Overall a great place to be if you like animals and would love to have a close encounter with them.

Uniquely interwoven man-caves were build all around Ross to help the important British officers escape during an attack. Now when the caves have ran out of their purpose, they are abandoned and act as a showcase of skills, effort and hardships faced by Indian workers to make them.

The caves follow several joint paths that connect important offices and constructions throughout the island and present a very mysterious vibe to the explorer who gives them a go.

Before visiting them, it's always recommended to have a guide with you to ensure safety and swift return so that no complications arrive later on.

The pond is exactly what its called. Its a large pond where the water accumulates and stays for long periods, which has made it turn green in color. There are a few small ruins near the pond which was used by the British a long time ago.

The place is surrounded by tall trees from all sides and has a cozy little place to sit back, relax and enjoy the view.

You can easily reach here by following the signs in less than 15 minutes of walking.

Several huts and small sheds are build throughout this Island where one can take a break from the tour and catch a breath surrounded by the shade of tall trees and shrubs.

The island is also home to a wide variety of bird species who chirp and play around the visitor and present a wonderful ambiance. What better place could you find to relax and have lunch?

How to reach Ross Island?

The Ross island is located very close to Port Blair, in fact, the whole island is perfectly visible from the Water Sports Complex and is a completely disconnected by land so it's not possible to reach there by road.

The island can only be reached by taking a boat or ferry from the Water Sports Complex which will take you directly to the jetty in less than 15 minutes. The cost of boat can range from Rs. 150 to Rs. 500 based on the size and seat position.

You will have to book a boat in advance to ensure seamless travel as the tickets sell out really fast. The tickets can be easily obtained by visiting the Directorate of Shipping Services office, located at Aberdeen Bazaar.

Make sure to get a returning ticket as well because there is no place to stay in the island.

Don't forget to take your identity proof as its needed for booking tickets and also passport in case you aren't an Indian citizen.

You can easily plan a tour to this island by keeping the below given things in mind. A complete trip to the ross island can be easily done in half a day, so you'll have to visit another destination to complete the whole day.

People visiting this island mostly include a trip to the North Bay Island too, which is great for water sports and both can be done in under a day. You can find several ferries that include a trip to both the islands.

The best time to visit Ross Island is from October to March. This is because the weather in Andamans during these months is clean and there is no chance for sudden rainfalls which lets you do sightseeing without any hurdles.

There is a Rs. 30 entry ticket to visit Ross Island for adults and Rs. 25 for children. These prices change a lot. You might also have to pay for boat and light and sound show, which might add to your tour cost.

There is a small cafeteria and restaurant at Ross Island which serves both tourists and defense personnel. The prices are a bit high when compared to Port Blair as the goods are transported there via a boat. The restaurant serves veg and non-veg food with decent menu, but don't expect a lot of dishes.

There are also a lot of small vendors who offer fresh coconut water near the jetty, so you can probably get some refreshments on the island and you can have some snacks when you reach the Water Sports Complex on your return trip.

There is an RO water purifier near the jetty, in case you ever need to refill your water bottle.

What is the opening and closing time of Ross Island?

The Ross Island opens for tourists at 9:00 A.M and the closes at 3:00 P.M. The last boat leaves the island at the same time.

What are the best Hotels at Ross Island?

There are no hotels available at this island, as it is not allowed to stay the night at Ross. But you can book hotels in Port Blair which is very close to the island.

Where can I find boats to Ross island?

You can find them in the Water Sports complex, there are a lot of boats for hire. There are several boats that go to Ross and North Bay together, and you'll need to board the one which is only going to Ross as the north bay ones will come to Port Blair directly.

Can I stay in Ross, are there any hotels available?

No, staying at this island is not allowed by the Govt. and therefore there are no hotels here. You will have to go back to Port Blair after your tour, the island closes for tourists at 3 P.M.

Are there any water sports available at this island?

No, there are no water sports available at Ross, as it is branded as non-commercial. If you are planning for activities, you can visit North Bay, which has most activities available in Andaman.

Is photography allowed at Ross Island?

Yes, Photography is allowed here, and it is one of the best places for unique shots of beautiful trees and history.

What is the timing of Light and Sound show at Ross Island?

The show starts at 5:15 and ends in one hour. There is a small entry fee of Rs. 150/- and the show takes place everyday except for Wednesdays and Govt. holidays.

Can I explore the island by myself?

Yes, you are free to explore Ross Island by yourself and you can find a lot historical ruins surrounded by tall tropical tees in the island.

Is Ross Island open on all days?

Yes, the island is open for tourists everyday and there are no special weekdays when it's closed. Ross used to be closed on Wednesdays but the holiday was removed a few months ago.
‍
Although, there are some Govt. holidays when the island is closed, and this changes a lot, so you'll have to confirm with a local operator if you are visiting on a public holiday.

Tours including Ross Island and other nearby islands:

These are the tours that include the Ross Island and a few nearby islands in Andaman. You can also request a solo tour to the island with your friends and family. Simply fill in the form and our Andaman expert will help you plan your vacation in under your budget. 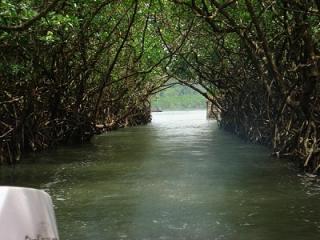 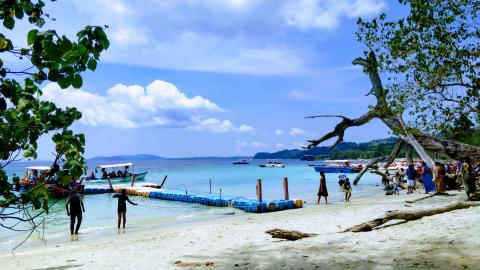 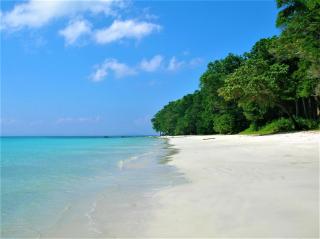 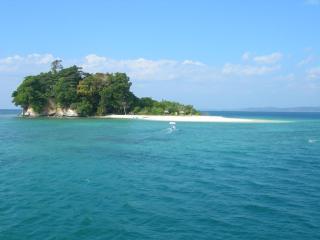 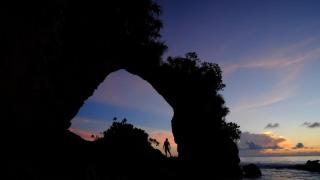 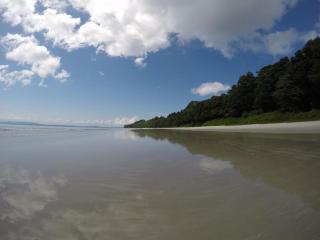 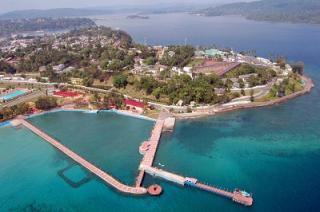 Planning a trip to Andaman?

Eternal Andamans is a top rated tour operator in Andaman Islands, that offers packages at the lowest guaranteed rates, including LTC bills for Govt. employees ➜ 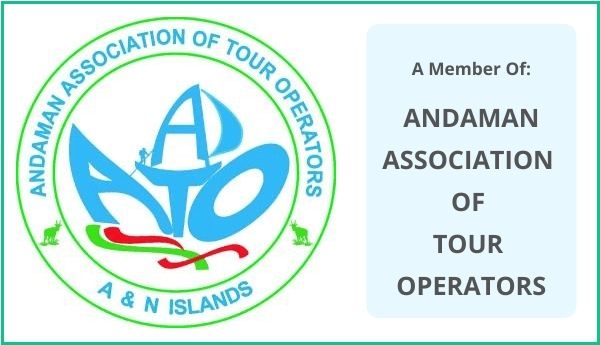 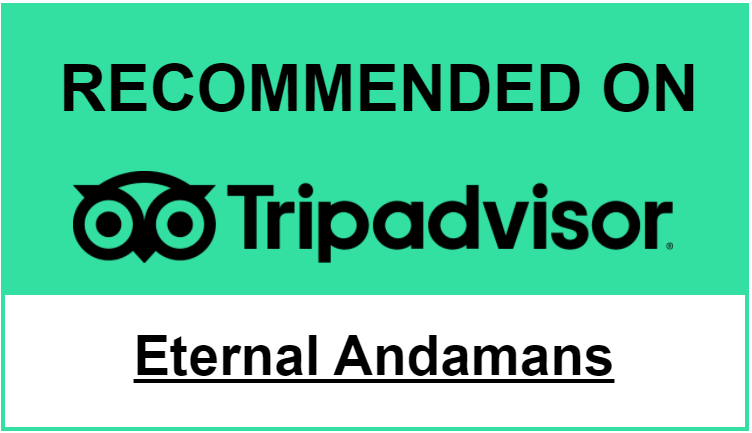 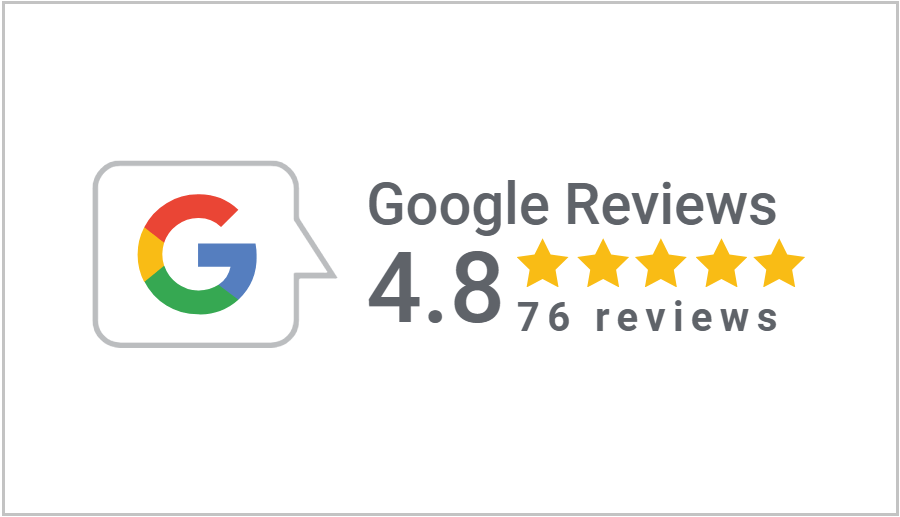